I journeyed back home to Cape Cod, MA on Friday for some much needed R&R and a chance to strut my stuff at the Falmouth Road Race. The FRR, now in its 36th year, was originally a pub-to-pub race (ie – how fast can you run from bar #1 to bar #2). The race eventually caught the attention of bigwigs like Shorter, Rodgers and Salazar in the late ‘70/early ‘80s and now it is arguably (I think?) the biggest/most popular race (11,000 runners) in New England sans of course the Boston Marathon (fact check needed). I hadn’t run Falmouth since 1999, but before then had a 4 year streak in which I ran progressively faster each summer as I matured and my training got better. I was excited for this “Homecoming” and hoped to really run well. My training has been going great but my racing has been sub-par. I seem to be wussing out when the going gets tough and not pushing when there is no one around to push me. I hoped to change that at Falmouth.
I arrived at the starting line super early (buses shuttle you to the start and I’d rather get there early than wait in long lines later and muscle my way onto a bus). I sat down in the shade and proceeded to stretch for 45 mins before heading out for a warm-up. The sleepy town of Woods Hole was filled with running celebrities like Meb, Fernando Cabada, Jon Rankin, James Carney, Ed Moran and Boaz Chemboiyo. Surprisingly I saw a number of DC-area runners and friends including Michelle Sikes, Rod Koborski, Matt Ernst, Scott Munro, Mike Fleg and even some of the PACERs (they even follow me on my vacation!). I ran a 3 mile warm-up and chatted with some others I knew from yesteryear and then got ready for business. My goal had been to break 36:00 for the 7+ mile race and one of the top 20 Americans. My PR as a 19 y/o was a 38:22.
The course rolls along some solid hills for the first 2 miles and then levels out as you run along the beach before running up the “big hill” just 600m from a downhill finish under a ginormous American flag. Falmouth is definitely one of my most favorite race courses. The winding roads, the up and downs and of course the sandy roads that roll along the sandy beaches all make for a beautiful course. In addition, the spectators are top notch. 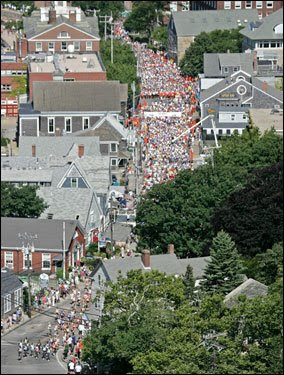 The “go” word was finally given and the crowd of thousands poured over the grated drawbridge and towards Falmouth Heights some 7 miles away. I had a great start and pushed up through the crowd towards the first hill. I passed about 50 people in the first 800m and really worked the hills (both up and down). I tried to key off of PACERS Robert Wade and kept him in my sights ahead of me. I had no idea how fast I was going but it “felt” right. I hit mile 1 in 4:59 (a bit too fast and ahead of schedule) and surged up the hill into the second mile. I had forgotten how rolling the course was but it really broke up the monotony of a flat race. Many of the DC-area races are fairly flat and I usually fair well on hills, so I was happy to have as many as I did. I hit mile 2 in 10:08 (5:09 – my planned race pace) and felt really good. Unfortunately I was all alone (and had been since mile 1) and spent my time chasing after Wade, Pete Gilmore and the rest of their 4 or 5 man pack ahead of me. Eventually their pack split apart and I chased down one of the guys who fell off sometime in the third mile. I hit mile 3 in 15:26 or so and tried to get myself to surge the flats. The route along this beach section was quite hot. There was a tailwind

and the sun was really beating down on the runners. It wasn’t very hot outside (high 70s) but the asphalt/beach/sun/no wind combination made it feel worse than it was. I soon passed Gilmore who was throwing up in the sand along the side of the course (I didn’t know it was him until I chatted with him after the race). I kept grinding away but I would catch myself falling asleep out there and kept needing to remind myself I was in a race. I hit mile 4 in 20:44 and knew I was in trouble. My wheels were coming off as was evident in my positive splits. Push, push keep pushing damn it – I kept telling myself. I told myself that I was failing yet again, but then would argue back that I still had time to run well, but that I had to bury the negative thoughts (a battle between the angle and devil over each of my shoulders). The course was now pancake-flat and I had no excuses. I hit mile 5 just over 26:00 minutes and again tried to surge. I caught one other guy but then Gilmore came blazing back by me. I tried my best to go with him but his legs were rolling at a different speed. Mile 6 was hit in 31:29 (my 10k PR) and I got passed again (ouch!). Again, I tried to go with him and this time was a bit more successful.

We curved our way back towards the beach and then began our climb up the “big hill”. I ran the hill quite well (evidence that I wasn’t going as fast as I should have during the last 2 miles) and then hammered my way towards the giant US Flag (further evidence I hadn’t used up my battery). I staggered across the finish and immediately grabbed an ice cold water from a fan then a bag of ice from the medical tent which I rested on my head like a strange hat.
I ended up coming in 32nd (19th American) with a time of 36:46…well off my goal. My goal time might have been a bit ambitious, but I was disappointed (again) with how I got “soft” mid-race. Regardless of competition, I need to learn to get tough when the going gets tough. 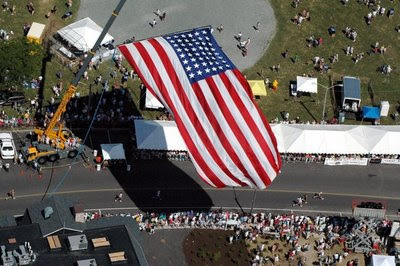 Post-race note - my achilles has been very sore and I'm taking at least today off...maybe tomorrow too.

Yesterday, after a 10 mile run morning run with Dwyer and a competitive 3 games of horseshoes on the beach with my friends from back home, I swam about a mile from an island back to my parent's place (guided my kayak and motor boat). I emerged on the other side of the bay freezing and arms throbbing...went home and fell asleep at 9:45pm and woke up 11 hours later! Swimming is defintely MUCH harder than running!

Today I kayaked...tomorrow shark hunting and seal clubbing with Matt Ernst. I am off to get my harpoon - which is in the shop being sharpened.

Nice run. Do you have a link to results? I can only search individuals on the official site.

You can search by gender...I'll try and paste men's results below: